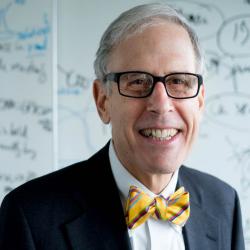 For work in cardiac physiology and pathophysiology leading to the use of monoclonal antibodies to platelet surface antigens in antithrombotic therapy.

On September 1, 2001, Barry S. Coller, M.D. became the David Rockefeller Professor of Medicine; Head, Laboratory of Blood and Vascular Biology; Physician-in-Chief of The Rockefeller University Hospital; and Vice President for Medical Affairs at The Rockefeller University. He also serves as the founding Director of the Rockefeller University Center for Clinical and Translational Science and the Principal Investigator of the University’s Clinical and Translational Science Award (CTSA) from the National Center for Advancing Translational Sciences of the National Institutes of Health. From 1993 to 2001, Dr. Coller was the Murray M. Rosenberg Professor of Medicine and Chairman of the Samuel Bronfman Department of Medicine at Mount Sinai School of Medicine in New York City, as well as Chief of the Medical Service of the Mount Sinai Hospital. Dr. Coller received his B.A. degree, magna cum laude from Columbia College in 1966, and his M.D. from New York University School of Medicine in 1970.  He completed his residency in internal medicine at Bellevue Hospital in New York City and advanced training in hematology and clinical pathology at the National Institutes of Health.  He joined the faculty at Stony Brook in 1976 as an Assistant Professor of Medicine in the Division of Hematology.  During his years at Stony Brook he was the Clinical Director and Head of the Hematology Division, a consulting physician at the Northport VA Medical Center, Clinical Chief of the University Hospital Hematology Laboratory, a Director of the LI High Technology Incubator, a Director of the Stony Brook Foundation, and Associate Director for Biomedical Research of the Biotechnology Center for Advanced Technology. In 1982 Dr. Coller became Professor of Medicine and Pathology at Stony Brook. He was awarded the title of Distinguished Service Professor of Medicine and Pathology at Stony Brook in 1993.

Dr. Coller served as President of the American Society of Hematology in 1997-1998, the founding President of the Society for Clinical and Translational Science from 2008-2011, and as a member of the Advisory Council of the National Heart, Lung and Blood Institute from 2008-2012. He currently Chairs the Steering Committee of the National Collaboratory, a trans-institute NIH Common Fund project, and Chairs the Program Steering Committee of the NIH National Centers for Accelerated Innovations (NCAI).

Dr. Coller’s research interests have focused on hemostasis and thrombosis, in particular platelet physiology.  He developed a monoclonal antibody that inhibits platelet function and a derivative of that antibody (abciximab; ReoProÔ; Centocor/Eli Lilly) was approved for human use by the FDA in 1994. It is now in clinical use throughout the United States, Europe, Scandinavia, Australia, and portions of Asia, to prevent ischemic complications of percutaneous coronary interventions such as angioplasty and stent insertion. More than 4.0 million patients have been treated with abciximab. He also developed an assay to assess platelet function, and automated derivatives of that assay to monitor therapy with abciximab, aspirin, and clopidogrel (Plavix™) have been approved for human use by the FDA (VerifyNow; Accumetrics). Dr. Coller is the recipient or a co-recipient of fourteen U.S. patents.