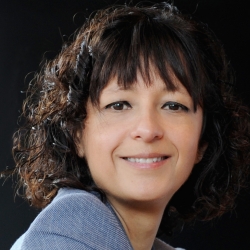 Emmanuelle Charpentier studied biochemistry, microbiology and genetics at the University Pierre and Marie Curie, Paris, France and obtained her PhD in Microbiology for her research performed at the Pasteur Institute. She then continued her work in the United States, at The Rockefeller University, New York University Langone Medical Center and the Skirball Institute of Biomolecular Medicine (all in New York, NY) and at St Jude Children's Research Hospital (in Memphis, TN). E. Charpentier returned to Europe to establish her own research group at the Max F. Perutz Laboratories of the University of Vienna in Austria where she habilitated in the field of Microbiology. She was then appointed Associate Professor at the Laboratory for Molecular Infection Medicine Sweden (MIMS, part of Nordic European Molecular Biology Laboratory (EMBL) Partnership for Molecular Medicine) at Umeå University in Sweden where she habilitated in the field of Medical Microbiology and is still active as a Visiting Professor. Between 2013 and 2015, E. Charpentier was Head of the Department of Regulation in Infection Biology at the Helmholtz Centre for Infection Research, Braunschweig, and Professor at the Medical School of Hannover in Germany. In 2013, she was awarded an Alexander von Humboldt Professorship, which she has held since 2014. In 2015, E. Charpentier was appointed Scientific Member of the Max Planck Society in Germany and Director at the Max Planck Institute for Infection Biology in Berlin, Germany.

E. Charpentier is recognized as a world-leading expert in regulatory mechanisms underlying processes of infection and immunity in bacterial pathogens. Her work has led to a number of seminal discoveries and insights into pathways governing antibiotic resistance and virulence of bacterial pathogens. With her recent groundbreaking findings in the field of RNA-mediated regulation based on the CRISPR-Cas9 system, E. Charpentier has laid the foundation for the development of a novel, highly versatile and specific genome editing technology that is revolutionizing life sciences research and could open up whole new opportunities in biomedical gene therapies. The resulting field of research is now developing at dazzling speed, with exciting new aspects emerging almost weekly. E. Charpentier is Elected Foreign Member of The Royal Swedish Academy of Sciences 2015, Elected Member German National Academy of Sciences 2015, Elected Member of the European Academy of Microbiology 2015, Elected Fellow of the American Academy of Microbiology in 2015 and Elected EMBO Member in 2014. E. Charpentier has been awarded prestigious honors including the Paul Ehrlich and Ludwig Darmstaedter Prize 2016, French Chevalier Order de la Légion d’Honneur in 2016, World Technology Award for Biotechnology 2015, Leibniz Prize 2016, a 2016 Vallee Visiting Professorship, the 2016 HFSP Nakasone Award, an Honorary Doctorate of the KU Leuven, the Science Award of Lower Saxony 2015, the ABRF Annual Award for Outstanding Contributions to Biomolecular Technologies 2016, the Massry Prize 2015, the Otto Warburg Medal 2016, the L’Oréal-UNESCO For Women in Science Award 2016, the Carus-Medal of the German National Academy of Sciences Leopoldina 2015, the Umeå University EC Jubilee Award in 2015, the Gruber Prize in Genetics 2015, the Princess of Asturias Award for Technical and Scientific Research 2015, the 11th International Society for Transgenic Technologies Prize, the Hansen Family Award 2015, the 2015 Louis Jeantet Prize for Medicine, the 2015 Ernst Jung Prize for Medicine, the 2015 Breakthrough Prize in Life Sciences, the 2014 Grand Prix Jean-Pierre LeCocq, the 2014 Jacob Heskel Gabbay Award in Biotechnology and Medicine, the 2014 Dr Paul Janssen Award, the 2014 Göran Gustafsson Prize, an Alexander von Humboldt Professorship in 2013 and the Eric K. Fernström Prize in 2011. The impact of her scientific accomplishments has also been recognized in the broader community of world affairs. E. Charpentier was selected as one of TIME’s 100 Most Influential People in the World in 2015, one of Foreign Policy’s 100 Leading Global Thinkers in 2014, one of Vanity Fair’s 50 most influential French people worldwide in 2014.

E. Charpentier is inventor and co-owner of seminal intellectual property comprising the CRISPR-Cas9 technology, and co-founder of CRISPR Therapeutics and ERS Genomics, created to facilitate the development of the CRISPR-Cas9 genome engineering technology for biotechnological and biomedical purposes.

I am honored to receive this award in recognition of our seminal work published in Nature in 2011 and in Science in 2012, including the discovery of tracrRNA and the delineation of its key role in the targeting and editing of DNA by CRISPR-Cas9. This work is a wonderful example of the importance of basic research, demonstrating its relevance for translational science and important medical applications.
Emmanuelle Charpentier Lab