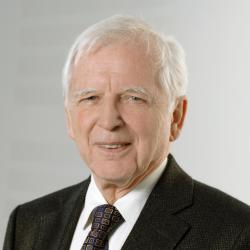 For work leading to the development of a vaccine against human papillomavirus.

Harald zur Hausen and Lutz Gissmann discovered that specific types of human papillomavirus (HPV) cause cancer of the cervix. This work began in 1972, after zur Hausen and colleagues failed to find genetic sequences for herpes simplex virus 2 in human cervical cancer and started to analyze the possible role of genital tract HPV in this disease. The research was subsequently bolstered by studies from cytologists providing evidence that an HPV was present in cervical dysplasia, a precursor lesion to cervical cancer that is the basis of the Pap smear.

Two years later, in 1974, Lutz Gissmann joined the zur Hausen group as a PhD student. Together, the scientists helped establish the heterogeneity of the papillomavirus family. Based on the subsequent isolation of papillomavirus types in genital warts and laryngeal papillomatosis, two of zur Hausen’s later students were able to clone and partially characterize the most prevalent virus types in cervical cancer, HPV 16 (Proceedings of the National Academy of Sciences 80, 3812, 1983) and HPV 18 (EMBO Journal 3, 1151, 1984). These two seminal studies included Gissmann, who played a critical role in directing the molecular biological techniques that were central to the investigations. In 1983, the scientists identified HPV 16 in precursor lesions of genital cancer, and in 1985, they revealed the genetic organization of HPV DNA in cervical cancer cells and the active transcription of HPV in the same kind of cells.

HPV16 and HPV18 are responsible for 70 percent of cervical cancer worldwide. From a global perspective, the disease ranks second in cancer incidence among women, and in many parts of Africa, Asia, and South America, it is the most frequent cancer among females. The work of many scientists followed the groundbreaking studies of zur Hausen and Gissmann, which established a role for HPVs in cancer. The development of preventive vaccines derive from the researchers’ initial studies as well as subsequent contributions. (Photo courtesy of Tobias Schwerdt
Source: DKFZ)