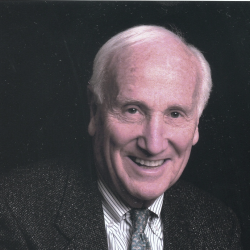 For elucidating the role of leukotrienes in asthma.

Austen’s studies of the cysteinyl leukotrienes (cysLTs) began with the partial purification of slow reacting substance of anaphylaxis (SRS-A) and characterization of in vivo functions. They progressed to the recognition of three cysLTs; LTC4, LTD4, and LTE4, differing in the length of the peptide adduct linked to eicosatetraenoic acid, an arachidonic acid metabolite and the functional identification of 3 different receptors.  The ,  cloning by expression of the cDNA and then the gene for human LTC4 synthase (LTC4S) was followed by the targeted disruption of LTC4S in the mouse to provide evidence that the cysLTs were involved in a range of pro-inflammatory responses including antigen-induced Th2 type pulmonary inflammation.  A crystal structure for human LTC4S revealed a three-fold symmetric trimer with each monomer composed of five alpha helices; and that particular arginine residues on opposing monomers directed the exquisite substrate specificity of LTC4 synthesis.  The cloning and disruption of the classic receptors for LTD4 (CysLT1R) and LTC4 (CysLT2R) was used to show that a double receptor deficient mouse possessed a third receptor (CysLT3R) with a preference for LTE4.  Whereas these studies served to reveal and integrate the innate proinflammatory functions of the cysLT/CysLTR pathway provided by activation of mast cells, basophils and eosinophils, the more recent finding that allergens, such as house dust mite, activate the pathway in antigen presenting dendritic (DC) cells to regulate T cell polarizing function adds a critical role in adaptive immunity.  That the LTC4S/cysLTs/CysLTRs system involves three ligands with sequential availability and markedly different stability that signal by at least three different receptors indicates a complex in vivo biology that may differ in different tissues, in different genetic backgrounds, and in different stages of an innate or adaptive immune inflammatory response as occurs in bronchial asthma.

Austen received his medical degree from Harvard Medical School followed by medicine residency and chief residency at Massachusetts General Hospital and postdoctoral fellowships at the Walter Reed Army Institute of Research, the National Institute for Medical Research (London, UK), and the Johns Hopkins Department of Microbiology.  He then joined the faculty of the Harvard Medical School (HMS) at the Massachusetts General Hospital, initially in Infectious Diseases and then as Chief of Pulmonary medicine.  He subsequently moved to the Robert B. Brigham Hospital as Physician-in-Chief and Chairman of a new HMS Department of Medicine entirely focused on rheumatology, allergy and immunology.  He is currently the AstraZeneca Professor of Respiratory and Inflammatory Diseases at HMS in the Division of Rheumatology, Immunology and Allergy of the Department of Medicine at the Brigham and Women’s Hospital.