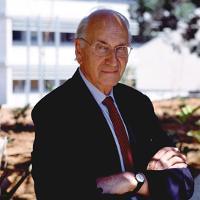 Leo Sachs was born in Leipzig, Germany in 1924 and came to England in 1933.  After the end of the war in 1945, he joined a Zionist youth movement with the intention of helping to found a kibbutz.  To prepare for this, he obtained a B.Sc. with 1st class Honours in agriculture and agricultural botany at the University of Wales, Bangor but became interested in genetics and received a Ph.D. at the University of Cambridge.  He was then on the staff of John Innes Institute in England working on mammalian including human chromosomes.  He came to Israel and to the Weizmann Institute in 1952.  When he came to the Weizmann Institute, biology was just beginning there and he established the department of genetics and initiated research on genetics in relation to various aspects of biomedical sciences. He has made pioneering contributions to establishing research in the biomedical sciences in Israel and in representing Israel science in Israel and abroad. During his time in Rehovot he has trained many students and postdoctoral fellows, who now occupy senior positions at various Universities and Institutes in Israel and elsewhere. His discoveries have pioneered new approaches to basic and medically applied aspects of stem cell biology, development, hematology and oncology, and led to new therapies. He is the Otto Meyerhof Professor of Molecular Biology at the Weizmann Institute and continues to have a very productive laboratory.

In Israel he received the Israel Prize for Natural Sciences, the first Emet Prize for Life Sciences and the Rothschild Prize for Biological Sciences.  He was the first Israeli to receive the Wolf Prize.  He is a member of the Israel Academy of Sciences and Humanities, a Foreign Associate of the USA National Academy of Sciences, a Fellow of the Royal Society in England, a Foreign Member of the Academia Europaea, a member of the European Molecular Biology Organisation, a Honorary Fellow of the University of Wales and a Honorary Life Member of the International Cytokine Society.  His international awards include the Wolf Prize in Medicine, the Royal Society Wellcome Foundation Prize, Alfred Sloan Prize from the General Motors Cancer Research Foundation, Warren Alpert Foundation Prize from Harvard Medical School, Bristol-Myers Award for Distinguished Achievement in Cancer Research, the Harvey Lecture at Rockefeller University, a Honorary Doctor of Medicine from Lund University in Sweden and a Honorary Doctor from Bordeaux University in France.  He has also given numerous invited lectures at different Congresses and Universities.