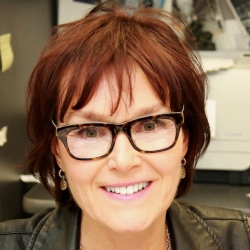 Dr. Lynne Maquat is the J. Lowell Orbison Endowed Chair, Professor of Biochemistry & Biophysics who holds concomitant appointments in Pediatrics and in Oncology, Founding Director of the Center for RNA Biology, and Founding Chair of Graduate Women in Science at the University of Rochester, Rochester, NY. After obtaining her PhD in Biochemistry from the University of Wisconsin-Madison and undertaking post-doctoral work at the McArdle Laboratory for Cancer Research, she joined Roswell Park Cancer Institute before moving to the University of Rochester. Dr. Maquat’s research focuses on the molecular basis of human diseases, with particular interest in mechanisms of mRNA decay. Dr. Maquat discovered nonsense-mediated mRNA decay (NMD) in human diseases in 1981 and, subsequently, the exon-junction complex (EJC) and how the EJC marks mRNAs for a quality-control “pioneer” round of protein synthesis. She also discovered Staufen-mediated mRNA decay, which mechanistically competes with NMD and, by so doing, new roles for short interspersed elements and long non-coding RNAs. Additionally, she has defined a new mechanism by which microRNAs are degraded, thereby regulating mRNAs so as to promote the cell cycle.

Maquat is an elected Fellow of the American Association for the Advancement of Science (2006); an elected Member of the American Academy of Arts & Sciences (2006), the National Academy of Sciences (2011), and the National Academy of Medicine (2017); and a Batsheva de Rothschild Fellow of the Israel Academy of Sciences & Humanities (2012-3). She received the William C. Rose Award from the American Society for Biochemistry & Molecular Biology (2014), a Canada Gairdner International Award (2015), the international RNA Society Lifetime Achievement Award in Service (2010) and in Science (2017), the FASEB Excellence in Science Award (2018), the Vanderbilt Prize in Biomedical Science (2017), the Wiley Prize in Biomedical Sciences (2018), the International Union of Biochemistry and Molecular Biology Medal (2019), and the Wolf Prize in Medicine (2021). Maquat is well-known for her efforts to promote women in science.

To think that I would share this prize with Joan Steitz, someone who I have respected and admired for decades, is something I could never have imagined for much of my scientific career. I spent many years hoping that our hypotheses were correct, although I couldn’t think of another way to interpret our data, and we were very careful in our analyses. Right now, I am simply thrilled. It feel enormous gratitude to be recognized by my peers in this way.
Lynne Maquat Lab