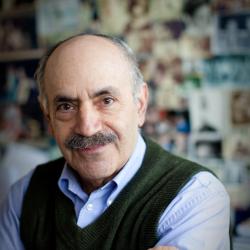 An internationally recognized authority on the genetic basis of human cancer, Dr. Robert A. Weinberg is a founding member of the Whitehead Institute for Biomedical Research and the Daniel K. Ludwig Professor for Cancer Research at the Massachusetts Institute of Technology (MIT). He is also the first Director of the Ludwig Cancer Center at MIT.

Over the past three decades, Dr. Weinberg has made breakthrough discoveries in the molecular and genetic roots of cancers. His lab discovered the first oncogene in 1982 and the first tumor suppressor gene in 1986. Most recently, Dr. Weinberg and his collogues were the first to define the genetic rules that must be followed in order for a normal human cell to be transformed into a human cancer cell.

Dr. Weinberg’s lab is primarily concerned with how oncogenes, their normal counterparts (proto-oncogenes), and tumor suppressor genes fit together in the complex circuitry that controls cell growth. His lab recently succeeded in creating the first genetically defined human cancer cells. Dr. Weinberg is particularly interested in applying this knowledge to improve the diagnosis and treatment of breast cancer. At present his lab seeks to understand how a malicious population of tumor cells, called cancer stem cells, develop their metastatic powers and what biological conditions are required to eliminate them.

Author or editor of six books and more than 400 articles, Dr. Weinberg is best known for his comprehensive cancer textbook, “The Biology of Cancer” 2nd edition. His other books, intended for a lay audience, are “One Renegade Cell”, "Racing to the Beginning of the Road: The Search for the Origin of Cancer" and "Genes and the Biology of Cancer," co-authored with Dr. Harold E. Varmus, former Director of the National Institutes of Health.

Dr. Weinberg is an elected Member of the U.S. National Academy of Sciences and Fellow of the American Academy of Arts and Sciences. He is also a Member of the American Philosophical Society and the Institute of Medicine. He has received the National Medal of Science (1997), the Wolf Prize in Medicine (2007), the Otto Warburg Medal (2007), and the Breakthrough Prize in Life Sciences (2013).