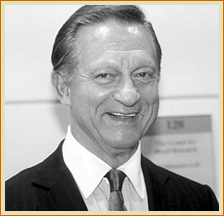 Warren Alpert 1921-2007Warren Alpert, founder and chairman of Warren Equities, Inc., and The Warren Alpert Foundation, was born in Chelsea, Massachusetts in 1920. The son of Lithuanian immigrants, he was the youngest of Tena and Goodman Alpert's five children.

Mr. Alpert earned a bachelor of science degree from Boston University in 1942. He then served in military intelligence during World War II, and was awarded the Purple Heart in 1945. Following his military service, he completed the Harvard Business School Advanced Management Program. Then, in 1947, with help from the GI Bill he received his master's degree in business administration from Harvard Business School.

He started his own business in 1950 with, as he told it, "$1,000 and a used car." At the time of his passing in March 2007, he was the sole owner of Warren Equities, Inc. Forbes magazine annually lists Warren Equities, Inc. as one of the nation's top 500 privately owned companies. Warren Equities, Inc. markets petroleum and food items, posting in excess of one billion dollars per year in sales. The company also engages in transportation and real estate, employing more than 2,100 people in eleven states.

Mr. Alpert's academic affiliations and contributions were significant. He was a founding donor of Harvard Medical School's "New Pathway" program with a $500,000 contribution. He also donated $20 million to Harvard in 1993 to name the new research center at the Medical School. In 1998, he donated $1 million to Harvard's Tosteson Medical Education Center. In 1999, Mr. Alpert donated $15 million to Mount Sinai Hospital to name the Warren Alpert Pavilion, dedicated for pediatrics and radiology.

In January 2007 Mr. Alpert made his final philanthropic donation of $100 million to the medical school at Brown University. The donation ensures a strong future for The Warren Alpert Medical School by providing funding for a new building as well as scholarships, biomedical research and the recruitment and retention of faculty.

Mr. Alpert passed away in New York City on March 3, 2007. Without a doubt his legacy of generous donations to the medical community will be felt for many years to come.

For questions about the Foundation not related to the prize, please contact: the Warren Alpert Foundation