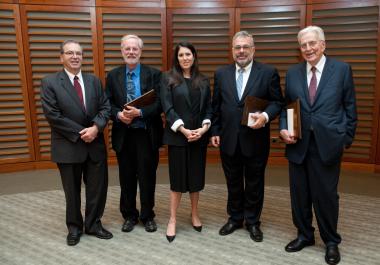 The 2013 Warren Alpert Foundation Prize will be awarded to David Botstein of Princeton University, and Ronald W. Davis and David S. Hogness, of Stanford University School of Medicine, for their seminal contributions to the concepts and methods of creating a genetic map in the human, leading to the identification of thousands of disease genes. This fundamental work ushered in a new era in human genetics and established the framework for the Human Genome Project.

The recipients will share an unrestricted prize of $250,000 and will be honored at a symposium on Thursday, October 3, 2013, at Harvard Medical School.
The Alpert Prize recognizes researchers for basic discoveries that promise to improve human health. The collective work of Botstein, Davis and Hogness does just that. Botstein and Davis’ landmark conceptual breakthrough, published in 1980, gave researchers the tools to trace and map out the genetic inheritance of disease in humans, while Hogness’ work provided the means of identifying the precise physical location of genes of interest on chromosomes. These findings revolutionized human genetics, allowing researchers to identify disease genes and focus on potential treatments and cures.

The late Warren Alpert, a philanthropist dedicated to advancing biomedical research, established the Prize in 1987. To date, the foundation has awarded more than $3 million to 45 individuals. Seven honorees have also received a Nobel Prize.
“The work of Botstein, Davis and Hogness perfectly exemplifies the spirit of the Alpert Prize, namely, to honor great science that has profound translational significance,” said Jeffrey S. Flier, dean of the faculty of medicine at Harvard Medical School. “Every scientist today working in the field of molecular genetics stands on the shoulders of these three giants.”

For much of the twentieth century, geneticists faced significant challenges when trying to apply the tools and insights gained in animal genetics to humans. As a result, while scientists could create precise genetic maps in model organisms, no such equivalent existed for humans.

Botstein and Davis led an effort that resulted in an idea that at the time was absolutely radical, namely, that you don’t have to map the observable traits, known as phenotypes, but instead can follow inheritance patterns using random differences in DNA as genetic markers—differences neutral to evolution and that have nothing to do with observable traits.

Following this insight, the first genetic maps that allowed researchers to trace patterns of inheritance in humans were made using as genetic markers locations on chromosomes where restriction enzymes slice through the DNA. And since the markers were DNA, this insight simultaneously provided a means through which the gene walking methods of Hogness could be used to isolate the genes responsible for disease. This method was called positional cloning or chromosome walking. Two of the early successes of this method were isolation of the genes responsible for Huntington’s disease and cystic fibrosis. Today, the great majority of simple inherited human traits have been mapped using this concept.

“After Botstein, Davis and Hogness published their findings, the world of human genetics changed radically,” said Clifford J. Tabin, head of the department of genetics at Harvard Medical School. “In the thirty years that have followed their breakthroughs, research in human genetics has jumped light years from where it had been. Our understanding into the genetic underpinnings of such complex diseases as certain cancers, heart disease and diabetes, to name just a few, has grown by many orders of magnitude. At this point it’s impossible to quantify the impact these individuals have had.”

“We are humbled and proud to honor Botstein, Davis and Hogness,” said Bevin J. Kaplan, Director of the Warren Alpert Foundation. “They have laid the groundwork for the understanding and treatment of innumerable causes of human suffering. No one is more deserving of this Prize.”

The Warren Alpert Prize has also recognized recipients for discoveries that have impacted a wide spectrum of diseases, including asthma, breast cancer, H. pylori, hepatitis B and HIV/AIDS. Recent past honorees include Julian Adams of Infinity Pharmaceuticals, Alfred Goldberg of Harvard Medical School and Kenneth Anderson and Paul Richardson, both of Dana-Farber Cancer Institute, for the development of bortezomib, a drug that has altered the lives of hundreds of thousands of people with multiple myeloma; Alain Carpentier of Hôpital Européen Georges Pompidou in Paris and Robert S. Langer of MIT for innovations in bioengineering; and the work of Harald zur Hausen and Lutz Gissmann of the German Cancer Research Center on human papillomavirus (HPV) and cancer of the cervix, which was recognized by the WAFP prior to their receiving the Nobel Prize.