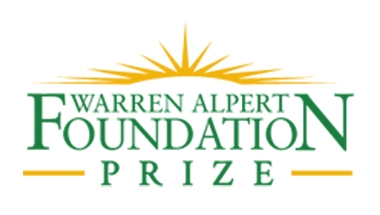 The 2015 Warren Alpert Foundation Prize will be awarded to Ruth S. Nussenzweig and Victor Nussenzweig, both faculty at the NYU Langone Medical Center, and Tu Youyou of the China Academy of Chinese Medical Sciences, Beijing, for their pioneering discoveries in chemistry and parasitology, and their personal commitment to translating these discoveries into effective chemotherapeutic and vaccine-based approaches to controlling malaria. Their collective work will continue to impact millions of lives globally, particularly in developing countries. The three recipients will share an unrestricted award of $500,000 and will be honored at a special symposium at Harvard Medical School on October 1.

The Alpert Prize recognizes scientists whose research has led to the prevention, cure or treatment of human diseases or disorders, and constitutes a seminal scientific finding that holds great promise of ultimately changing our understanding of, or ability to treat, disease. Collectively, the work of the Nussenzweigs and Tu has contributed to our fundamental understanding of malaria and has resulted in treatments that save lives.

The late Warren Alpert, a philanthropist dedicated to advancing biomedical research, established the Prize in 1987. To date, the foundation has awarded more than $3 million to 51 individuals. Seven honorees have also received a Nobel Prize.

“I am profoundly inspired by researchers who see bench-to-bedside as a seamless trajectory, not as isolated silos,” said Jeffrey S. Flier, dean of Harvard Medical School. “This year we are honoring three scientists who exemplify how the slow and painstaking work of basic biology can mean the difference between life and death for millions of men, women and children.”

Malaria is a deadly disease that disproportionately affects people in developing countries. In 2013, 200 million cases were reported, resulting in 584,000 deaths, mostly in Africa. It has been a global scourge for millennia.

Tu Youyou has been at the forefront of malaria research for nearly 50 years, and work under her direction has resulted in lifesaving medication for millions.

She was the head of Project 523, a program in her academy that was charged with finding treatments for malaria by the Chinese government. She and her colleagues examined the extracts of plants protective in treating fever, and then determined the active ingredient that protected against the malaria parasite. They then developed methodologies to extract the agent at a level that could be used therapeutically. After finding that the extract could eliminate the malaria parasite in the blood of mice and monkeys, Tu and her team tested it on themselves in order to ensure that it was safe.

This work eventually resulted in the drug Artemisinin, which to this day is the primary drug used worldwide to treat people infected with the malaria parasite. In fact, 400 million doses of this drug are given annually, usually in a combination therapy.

“When it comes to translation of scientific discovery, this is one of the greatest examples of the century,” said Dyann Wirth, chair of the Department of Immunology and Infectious Diseases at the Harvard T.H. Chan School of Public Health and a member of the Alpert Foundation’s scientific advisory prize committee. “This is classic basic research that has resulted in a drug that saves lives.”

“I would like to express my sincere appreciation to the Warren Alpert Foundation and Harvard Medical School for awarding me such a great honor,” said Tu, who was also honored with a Lasker Award in 2011. “For me, this award is not only an honor but a responsibility.”

Like Tu, Ruth and Victor Nussenzweig have been working on malaria for many decades, but from a different perspective. Their work has resulted in a vaccine for malaria that has passed all clinical trials and is now under regulatory review. Ruth S. Nussenzweig.

Ruth Nussenzweig has been conducting malaria research since the 1960s. A key moment in her research occurred when she discovered that she could induce an immune response in mice by injecting them with an irradiated malaria parasite. At that point, she and her husband, Victor, began collaborating. Together, they discovered that this response pointed to a protein on the surface of the parasite, called CSP, a potential target for protective antibodies. Further experiments in animal models demonstrated that subunits of this protein created an immune response that prevented infectious molecules from binding to cells in the liver.

When the Nussenzweigs began this work there were very few tools for understanding and investigating the immune response. In order to move forward they made pioneering technological breakthroughs as well, all of which have resulted in the most promising vaccine candidate against malaria to date. The vaccine, which is produced by the pharmaceutical company GlaxoSmithKline, is expected to be licensed later this year.

“Ruth and Victor are both visionary scientists with a persistence to carry their idea from inception to the realization that this can help people all over the world, particularly children in Africa,” said Wirth.

“I am grateful for this prize, grateful to everyone at the Alpert Foundation and at Harvard Medical School,” said Victor Nussenzweig. “Prizes like this are truly an honor, but still, the ultimate motivation for this work is the pleasure of discovery.”

“I have worked all around the world, so it means a great deal to me to be honored by this international award,” said Ruth Nussenzweig. “I am very happy with this prize. This is very special for both of us.”

The Warren Alpert Foundation Prize has also recognized recipients for discoveries that have impacted a wide spectrum of diseases, including asthma, breast cancer, H. pylori infection, hepatitis B and HIV/AIDS. Last year’s honorees are Oleh Hornykiewicz of the Medical University of Vienna and the University of Toronto; Roger A. Nicoll of the University of California, San Francisco; and Solomon H. Snyder of the Johns Hopkins University, for their pioneering research into neurotransmission and neurodegeneration. Previous honorees include David Botstein of Princeton University and Ronald W. Davis and David S. Hogness of Stanford University School of Medicine for their seminal contributions to the concepts and methods of creating a human genetic map, leading to the identification of thousands of disease genes; Julian Adams of Infinity Pharmaceuticals, Alfred Goldberg of Harvard Medical School and Kenneth Anderson and Paul Richardson, both of Dana-Farber Cancer Institute, for the development of bortezomib, a drug that has altered the lives of hundreds of thousands of people with multiple myeloma; Alain Carpentier of Hôpital Européen Georges Pompidou in Paris and Robert S. Langer of MIT for innovations in bioengineering. The work of Harald zur Hausen and Lutz Gissmann of the German Cancer Research Center on human papillomavirus (HPV) and cancer of the cervix, was recognized by the Warren Alpert Foundation prior to their receiving the 2008 Nobel Prize in Physiology or Medicine.

Each year the Warren Alpert Foundation (www.warrenalpert.org) receives 30 to 50 nominations for the Alpert Prize from scientific leaders worldwide. Prize recipients are selected by the foundation’s scientific advisory board, composed of distinguished biomedical scientists and chaired by the dean of Harvard Medical School.

Warren Alpert (1921-2007), a native of Chelsea, Mass., established the Warren Alpert Foundation Prize in 1987 after reading about the development of a vaccine for hepatitis B. Alpert decided on the spot that he would like to reward such breakthroughs, so he picked up the phone and told the vaccine’s creator, Kenneth Murray of the University of Edinburgh, that he had won a prize. Alpert then set about creating the foundation.

To award subsequent prizes, Alpert asked Daniel Tosteson (1925-2009), then dean of Harvard Medical School, to convene a panel of experts to identify scientists from around the world whose research has had a direct impact on the treatment of disease.