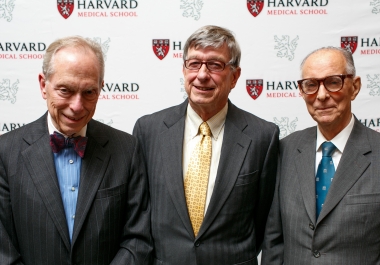 Boston, MA (June 10, 2014)—The 2014 Warren Alpert Foundation Prize will be awarded to Oleh Hornykiewicz of the Medical University of Vienna and the University of Toronto; Roger Nicoll of the University of California, San Francisco; and Solomon Snyder of the Johns Hopkins University, for their pioneering research into neurotransmission and neurodegeneration. The three recipients will share an unrestricted prize of $250,000 and will be honored at a special symposium at Harvard Medical School on Thursday, October 2, 2014.

The Alpert Prize recognizes scientists whose research has led to the prevention, cure or treatment of human diseases or disorders, and constitutes a seminal scientific finding that holds great promise of ultimately changing our understanding of, or ability to, treat disease. Collectively, the work of Hornykiewicz, Nicoll and Snyder has advanced our understanding of brain function and led to groundbreaking treatments for psychiatric disorders and Parkinson’s disease, and provided key insights into the molecular machinery of learning and memory.

The late Warren Alpert, a philanthropist dedicated to advancing biomedical research, established the Prize in 1987. To date, the foundation has awarded more than $3 million to 48 individuals. Seven honorees have also received a Nobel Prize.

“This year we are honoring three great scientists who have transformed our understanding of the human brain,” said Jeffrey S. Flier, dean of the faculty of medicine at Harvard Medical School. “Because of their creative and foundational work into the basic language of how neurons communicate, there are many people today whose lives have been enhanced.”

Early in his career, Hornykiewicz sought to learn about the brain by measuring the activity of the newly discovered catecholamines, compounds produced by the brain, which include dopamine. After developing methods that allowed him to measure concentrations in different regions of the human brain, he confirmed that dopamine in particular was high in the basal ganglia, an area associated with Parkinson’s disease. He then demonstrated, for the first time, that brain dopamine levels were low in Parkinson’s patients. Eventually he found that administering a chemical called L-dopa, a precursor to dopamine, alleviated symptoms in Parkinson’s patients.

Today, levodopa, as the chemical compound L-dopa is now called, remains the most efficacious first-line treatment for individuals suffering from Parkinson’s disease.

“To receive a prize so closely associated with Harvard Medical School is to me like reaching the summit,” said Hornykiewicz. “You can't possibly go higher up.”

Roger Nicoll has spent his career translating the language of neurons, gaining understanding into how neurons talk to each other and how these individual cells are affected by this communication. Neurons communicate through synapses, passing chemical and electrical signals back and forth. Nicoll focused on how, over time, these signals modify the activity and behavior of the neurons themselves. Using the technique of electrophysiology, Nicoll described how repeated synaptic communication, sometimes referred to as long-term potentiation, is actually a form of learning, one that underlies all aspects of human and animal capacity to acquire and store information.

This work has provided profound insights into the molecular mechanisms of learning and memory, the essence of what we call “the mind.”

“This award is such a tremendous honor for me,” said Nicoll. “Of course, the goal of every real scientist is discovery, experiencing the extreme joy of understanding some biological problem that seems strange and impenetrable. To suddenly be able to explain it, few joys are greater than that. This award validates that we’ve done something beautiful.”

While Nicoll has looked at the function of synapses, Snyder has spent his career looking closely at the individual receptors and neurotransmitters that make up the synaptic dialogue, studying how they connect and how they are distributed throughout the nervous system.

Receptors are molecules that receive chemical signals from neurotransmitters outside the cell. Snyder developed the first methods of measuring these receptors biochemically. Prior to this, the only way to study receptors was through physiology, looking at and measuring actual brain samples, an approach that yielded modest insights. Snyder, however, developed precise molecular methods for measuring these receptors, leading to the discovery of opiate receptors and their distribution in the brain. His lab is recognized for subsequently characterizing the receptors for almost every neurotransmitter that we know of today—and for discovering such neurotransmitters as nitric oxide and carbon monoxide.

His methods for measuring receptors have been taken up by drug companies around the world interested in psychotropics, and have led to better treatments for depression and schizophrenia as well as other forms of psychosis.

“Prizes like the Alpert Award are not only a great honor to recipients, but are valuable to society,” Snyder said. “They remind the general public how important this work is to everyone’s lives. These prizes motivate the scientific community, and inspire the public.”

“Hornykiewicz, Nicoll and Snyder are all extraordinary scientists who have transformed the landscape of neurobiology,” said Joseph Martin, the Edward R. and Anne G. Lefler Distinguished Professor of Neurobiology at HMS and former dean of the School. “I’m delighted that the Alpert Foundation has recognized their remarkable work.”
“We are thrilled to honor Hornykiewicz, Nicoll and Snyder this year,” said Bevin Kaplan Reifer, Director of the Warren Alpert Foundation. “The imaginative and spectacular nature of their contributions to neurobiology deserves recognition of this magnitude. We find them extremely deserving of the Warren Alpert Foundation Prize and we are excited to recognize their tremendous achievements in this field.”

The Warren Alpert Foundation Prize has also recognized recipients for discoveries that have impacted a wide spectrum of diseases, including asthma, breast cancer, H. pylori, hepatitis B and HIV/AIDS. Last year’s honorees are David Botstein of Princeton University and Ronald W. Davis and David S. Hogness of Stanford University School of Medicine for their seminal contributions to the concepts and methods of creating a human genetic map, leading to the identification of thousands of disease genes. Previous honorees include Julian Adams of Infinity Pharmaceuticals, Alfred Goldberg of Harvard Medical School and Kenneth Anderson and Paul Richardson, both of Dana-Farber Cancer Institute, for the development of bortezomib, a drug that has altered the lives of hundreds of thousands of people with multiple myeloma; Alain Carpentier of Hôpital Européen Georges Pompidou in Paris and Robert S. Langer of MIT for innovations in bioengineering; and the work of Harald zur Hausen and Lutz Gissmann of the German Cancer Research Center on human papillomavirus (HPV) and  cancer of the cervix, which was recognized by the Warren Alpert Foundation prior to their receiving the 2008 Nobel Prize in Physiology or Medicine.

Warren Alpert (1921-2007), a native of Chelsea, Mass., established the Warren Alpert Foundation Prize in 1987 after reading about the development of a vaccine for hepatitis B. Alpert decided on the spot that he would like to reward such breakthroughs, so he picked up the phone and told the vaccine’s creator, Kenneth Murray of the University of Edinburgh, that he had won a prize. Alpert then set about creating the foundation.

To award subsequent prizes, Alpert asked Daniel Tosteson (1925-2009), then dean of HMS, to convene a panel of experts to identify scientists from around the world whose research has had a direct impact on the treatment of disease.