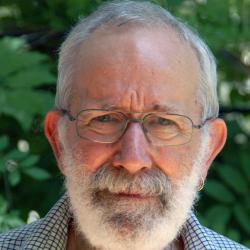 For linking gastric ulcers to the H. pylori bacterium.

In 1979, Dr. Warren first observed the presence of small curved bacteria, resembling Campylobacter, on a biopsy of the gastric mucosa. During the next two years, Dr Warren found many more examples of the bacteria on gastric biopsies, always on gastric-type epithelium and closely linked to a specific variety of gastritis. He submitted this work as a thesis to the Adelaide University in 2000 and was granted an M.D.

In 1981, Dr. Warren met Dr. Barry Marshall, registrar in the gastroenterology department. A fruitful partnership followed that demonstrated the clinical significance of the bacteria. They cultured the organisms and identified a new species, now called Helicobacter pylori. A clear association was found between H. pylori and peptic ulcers. Healed ulcers remained healed, without further medication after eradicating the bacteria.

Dr. Warren was the guest of honour at the Sixth International Workshop Campylobacter, Helicobacter and related organisms, in 1991 and he was guest speaker at the centenary meeting of the German Society of Pathology, May 1997. He received: the Distinguished Fellows Award of the Royal College of Pathologists of Australasia in 1995; the Inaugural Award of The First Western Pacific Helicobacter Congress, February 1996; the medal of the University of Hiroshima, September 1996; the University of Adelaide Alumni Association, Distinguished Alumni Award, October 1996; the degree of Doctor of Medicine, honoris causa, by the University of Western Australia, September 1997; the medal of the University “La Sapienza” of Rome, 2005; the degree of Doctor of the University of Adelaide, honoris causa, 2006; Honorary fellowship of the Royal Australian College of Physicians, 2006; the gold medal of the Australian Medical Association, 2006; and was elected a Fellow of the Australian Academy of Science, 2006.

Jointly with Dr. Marshall he received: the Warren Alpert Foundation prize at the Harvard University in 1994; the Australian Medical Association (WA) award, 1995; the Paul Ehrlich and Ludwig Darmstaedter Award, Paul Ehrlich Foundation, Johann Wolfgang Goethe-Universität, Frankfurt am Main, Germany, in March 1997; the Faulding Florey medal, Adelaide (SA), September 1998; included in the Cavalcade of Australian Scientists of the 20th Century (Australian Institute of Political Science, 2000); and was awarded the Nobel Prize for Physiology or Medicine, 2005.